I have been tracking the unemployment in Ireland using data from the central office of statistics in Ireland website cso.ie for some time and the changes are remarkable compared to the peak of unemployment in 2012. Currently the figure stands in 5.4% for the month of March 2019.

Countries with a large population of Irish Heritage

The map above shows the countries with a large population of people that claim Irish Heritage, based on the mapa available in Wikipedia . Assuming the data is correct, the highest population of Irish descendants is located in the U.S. (~33 Million). There are also considerable number of people with Irish ancestry in the UK, Australia and Canada. To all of you ... belated Happy St. Patrick's day.

This morning I was checking the GDP growth data in the European nations and I found out that last year it was particularly high in Malta, Czechia, Iceland and Sweden ... but in Ireland it was insane!. An interesting article from The Irish Times, explains how despite this number being statistically correct it's due to huge multinational companies moving assets to their Irish branches, for tax reasons.

According to the central statistics office of ireland, the adjusted unemployment rate in the country during the last 2 months has been 7.8%. The trend is definitively going down. I blogged about it in January and it was more than 8% back then.

The european union stats office publishes interesting statistics related to the acquisition of citizenship in the EU. Yesterday it was the anniversary of my Irish one, so I pulled out some stats related to the green island.

The first chart shows the increase in the number of new citizens from 2011, when the goverment streamlined the process of reviewing the applications, cutting a very important backlog.

The data has some additional information about the origin of the naturalised citizens both from the EU and Non-EU countries:

Living in Europe with an European passport defintively makes life way easier, so thank you very much Ireland.

100th Anniversary Of The Easter Rising In Ireland 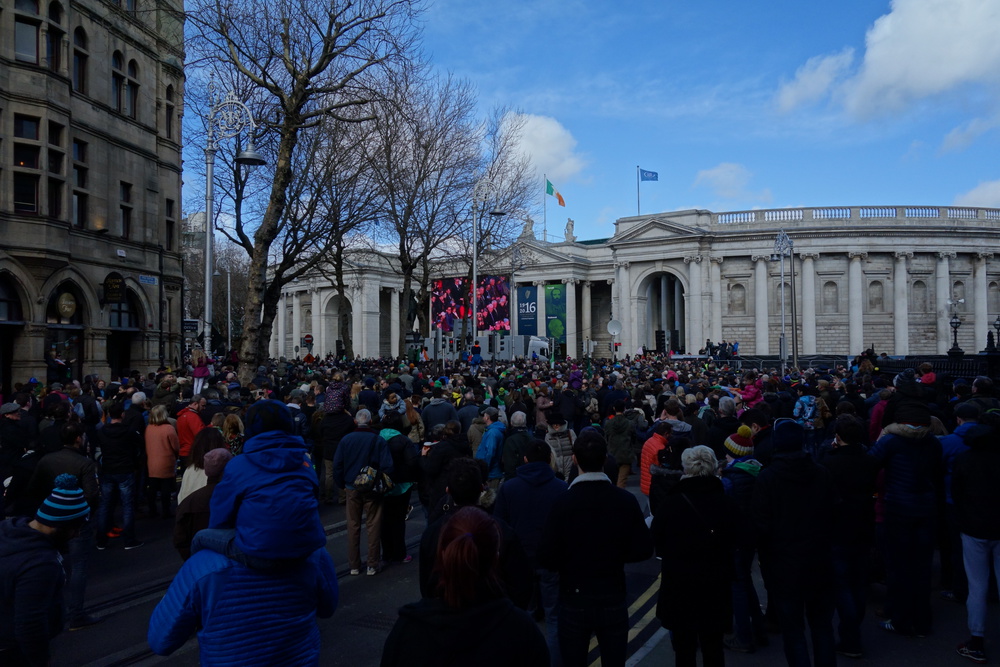 Last weekend I visited Dublin for the 100th year anniversary of the Easter Rising, when Ireland started the process to become and independent republic. The city was absolutely packed as you can see in this picture taken at college green.

Where The Irish Emigrants Live

Last thursday it was Saint Patrick's Day and the Irish pubs were celebrating the occasion in Berlin. I remembered last year I also celebrated it in Dunedin NZ. The Irish TImes published a couple of years ago an article with data about where the Irish emigrants live in the world:

The usual suspects are on top of the list: United Kingdom, United States, Australia, Canada and South Africa.

Last week I provided at work a couple of my pictures for the article The Lowdown on Living and Working in Ireland . One of the pictures I selected was one of my favorite ones. A completely empy O'Connell street in a Monday morning:

I love this picture not only for the beatiful colors in the sky and the nice contrast they do with the shadows of some of the Dublin landmarks (The General Post Office and the Spire), but also because of the strange feeling of seeing one of the busiest spots in Dublin completely empty.

Map of Ireland with population by county (including NI as well). Dublin is by far the most populated county

The central office of statistics in Ireland website cso.ie has some interesting data tables that can downloaded, so yesterday I decided to pull out the unemployment data and plot it.

I was curious because when I arrived to the country the economy was doing really good, but I saw the changes during the crisis of 08. I thought it would be interesting to see what happened in the last years. Even if the unemployment level hasn't reached yet the numbers of 2005, I think the trend is definitively positive.